Heiress and philanthropist Doris Duke built Shangri La, a sprawling, oceanfront estate in Honolulu, in the 1930s. She spent the next five decades perfecting the details of her home as a showcase for Islamic art.

“Doris Duke was ahead of her time, with an eye for art that was not well known in the Western world,” said Sarah Schroth, Mary D.B.T. and James H. Semans Director of the Nasher Museum. “She built a magnificent, far-away estate, transforming walls, ceilings, doorways, entire rooms with art and architectural details imported from the Islamic world. Before, you had to travel to Honolulu to see it; this exhibition brings Shangri La and its dazzling collection to us.”

Paradise with a Purpose

Doris Duke began collecting Islamic art during a 10-month honeymoon trip around the world in 1935. She hand-picked Islamic textiles, ceramics, paintings, jewelry, furniture, architectural elements, all for Shangri La. The objects came from Egypt, India, Iran, Morocco, Spain, Syria, Turkey and Uzbekistan, dating from as early as the first millennium B.C., but mostly created between the 10th and 20th centuries. Architectural elements from 18th- and 19th-century Damascus residences were shipped and reinstalled with new components to create the Syrian Room at Shangri La.

The 60 works in the exhibition were on view in North Carolina for the first time.

Doris Duke’s Shangri La was organized in six galleries to invoke the rooms of a home, placing the works of art within the context of Doris Duke’s modernist palace. Architectural drawings, large-scale color photographs of the estate and an architectural model, as well as photographs and videos of Shangri La during its construction in the 1930s, were also on view to help tell the story.

Doris Duke was born in 1912, the only child of James Buchanan Duke and Nanaline Holt Inman. “Buck” (as Doris’ father was called), along with his brother Benjamin and father, Washington Duke (for whom the university is named), founded the American Tobacco Company, and, in partnership with Ben Duke and their associates, founded what is now Duke Energy. He died in 1925 when Doris Duke was 12 years old, leaving his daughter about $80 million to be parceled out during her lifetime, beginning on her 21st birthday.

In addition to purchasing Islamic art, Doris Duke supported a wide range of causes, including medical research, architectural conservation and preservation, wildlife protection and child abuse prevention. Doris Duke died in 1993, at the age of 80, with a net worth of nearly $1 billion.

In accordance with her will, the Doris Duke Foundation for Islamic Art was established in 1998 to promote the study and understanding of Islamic arts and cultures. The foundation is in charge of the management and preservation of Shangri La, which is used for educational programs and is open to the public. As part of its mission, Shangri La hosts contemporary artists and scholars researching Islamic art.

Since 2004, Shangri La has hosted artists in residence whose work engages with the site and the collection. Artists pursue their own creative work and present programs such as lectures, performances and workshops. Works in a variety of media by eight contemporary artists who held residencies at Shangri La are included in the exhibition. These artists—Zakariya Amataya, Ayad Alkadhi, Afruz Amighi, Shezad Dawood, Emre Hüner, Walid Raad, Shahzia Sikander, and Mohamed Zakariya—were asked to create works inspired by their experiences of the site, sharing contemporary perspectives on Shangri La, its collection, and Doris Duke. Two of these artists led programs at the Nasher Museum during the exhibition. Mohamed Zakariya gave a free public talk on calligraphy during the Museum’s Eid al-Adha event; Shahzia Sikander was on campus for an artist residency, visiting classes and meeting with students, with her visit culminating in a free public talk.

Doris Duke’s Shangri La: Architecture, Landscape, and Islamic Art was organized by The Doris Duke Foundation for Islamic Art, which also provided support for its presentation at the Nasher Museum and national tour. Additional support for the exhibition’s presentation was provided by an anonymous donor, Graduate Liberal Studies at Duke University, the Duke Islamic Studies Center, and Stearns Financial Group. 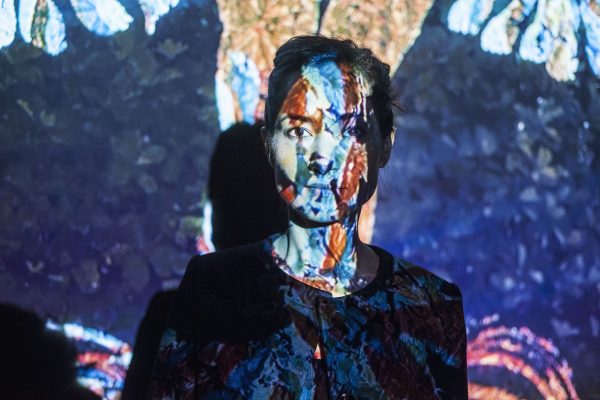