Commissioned for the Collection

The Nasher Museum presented Precarity, a new three-channel video installation created by John Akomfrah, a London-based artist and filmmaker. Precarity works with the themes of risk, hybridity and the unfathomable to explore the city of New Orleans through the remarkable life and times of Charles “Buddy” Bolden, the first person known to have explored the sonic tonalities of the music we now call jazz.

Beginning in 1900, Buddy Bolden was the most popular musician in New Orleans, playing everywhere from Uptown to Storyville. Celebrated for his raucously loud coronet, innovative improvisation and down-and-dirty style, “King Bolden” reigned until 1907, when he was permanently committed to the State Insane Asylum in Jackson, Louisiana, with schizophrenia. An almost mythical figure, he left behind no known recordings and only a couple of grainy images.

Precarity is consequently as much a ghost story as it is a portrait of a historical figure. It is also a lyrical exploration of the city that gave rise to jazz, the preeminent art form of the 20th century—a development that owed itself, in large part, to New Orleans’s position as a cultural crossroads. Akomfrah has also situated Precarity at a crossroads, or intersection, of genres: namely, of the film essay, the historical documentary, the costume drama and the music video. In that fertile space, Precarity presents a sonographic and visual history of Bolden and his legend, the emergence of jazz and the incomparable city of New Orleans.

Akomfrah is known for his distinctive, polyrhythmic visual and sonic style. His work moves across cultures to seamlessly meld history with mythology, the archival with the contemporary and image with sound. Recognized as a trailblazer in the world of British cinema, he makes films that challenge prevailing narratives and gives voice to underrepresented communities.

In 1982, Akomfrah cofounded the influential and forward-looking Black Audio Film Collective (BAFC) with Lina Gopaul and several other artists; although the BAFC disbanded in 1988, Akomfrah still collaborates today with Gopaul and their longtime partner David Lawson through their production company Smoking Dogs Films. In 2017, Akomfrah won the UK’s Artes Mundi Prize.

Excerpted from Prospect.4: The Lotus in Spite of the Swamp, the catalogue edited by Schoonmaker to accompany Prospect.4, the citywide triennial in New Orleans, on view from November 18, 2017, through February 25, 2018. This work premiered at the Ogden Museum of Southern Art in New Orleans, as part of Prospect.4 and is now part of the Nasher Museum’s collection.

This exhibition was organized by Trevor Schoonmaker, Chief Curator and Patsy R. and Raymond D. Nasher Curator of Contemporary Art.

Precarity was originally commissioned for the 2017 New Orleans Triennial, Prospect.4: The Lotus in Spite of the Swamp, curated by Schoonmaker. Its presentation was made possible by Nancy A. Nasher and David J. Haemisegger and the VIA Art Fund, with additional support from the Nasher Museum of Art at Duke University, the New Orleans Jazz & Heritage Foundation, and Smoking Dogs Films.

What Does Art Look Like in America’s Most “Prophetic” City?

But if P.4 has produced a masterpiece, it’s John Akomfrah’s video installation, Precarity, one of many new commissions at the triennial.

Akomfrah’s long, slow takes of unspeaking costumed actors—sometimes overlooking the modern city—intercut with shots of antique photos and documents submersed in a running stream, and accompanied by a soundtrack with suggestive poetry in the musician’s voice, bring Bolden back to enthralling, if still fundamentally unknowable, life.

“I felt a kind of debt to this figure who’d I’d inadvertently robbed of his rightful place in the pantheon of jazz.” – John Akomfrah

"In two weeks the Nasher Museum of Art at Duke University will exhibit Akomfrah’s 'Precarity,' which debuted at Prospect.4." -- Tyler Green

"Like the best of Akomfrah's films, Precarity complicates the narratives of cultural memory and erasure, fiction and truth, assimilation and refusal." -- Laura Jaramillo 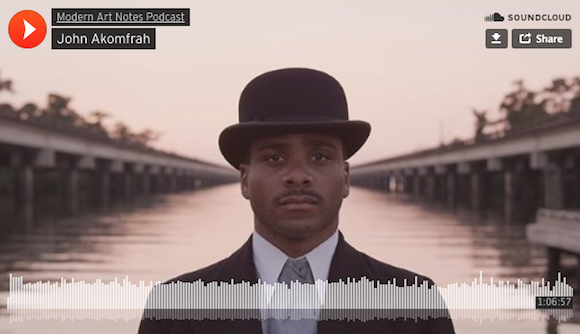 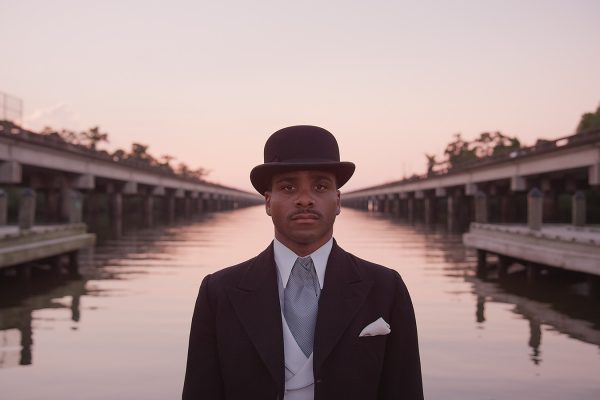 The health and safety of our community is our top priority. In accordance with Duke University, the museum is closed to visitors until further notice. The café and store are closed. Find updates and the latest information on Duke’s Coronavirus Response website.