Farewell to our Founder

Raymond D. Nasher greets the crowd on October 2, 2005, the opening day of the Nasher Museum of Art at Duke University. Photo by Duke Photography.
Published March 20, 2007 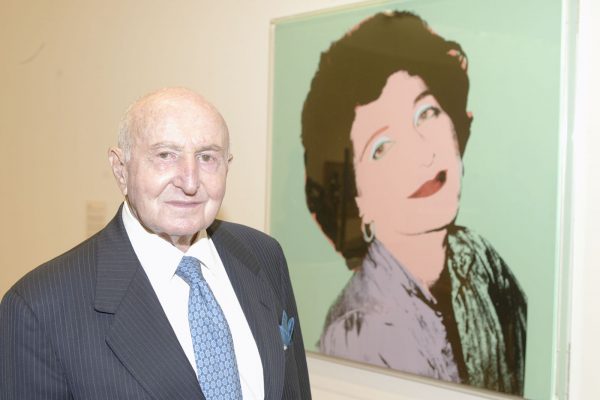 Ray Nasher was Duke’s cultural hero. He was a man of the people, insisting that the museum be placed close to the public highway so that the city of Durham would be involved. Now thanks to Ray, we shall celebrate constantly his extraordinary museum and cultural center at Duke. He has been my cherished friend for 50 years and I shall miss him every day.

Raymond D. Nasher, namesake and founder of the Nasher Museum of Art at Duke University, died on March 16, 2007, at a Dallas hospital. He was 85.

Nasher was one of the country’s leading collectors of modern and contemporary sculpture and had strong family ties to Duke. A graduate of the class of 1943, he served on the university Board of Trustees from 1968 through 1974, when he was elected trustee emeritus.

“Ray Nasher’s generosity and vision raised the arts to a new level at Duke, said Richard H. Brodhead, president of Duke University. “Our Nasher Museum of Art, which Ray made possible, has established itself in just over one year as a major cultural force on campus and in Durham. What meant a lot to Ray was how much students have responded to the museum, since it was as a student himself that Ray thought of the idea that what Duke needed was a place to experience art. We are deeply indebted to him and in this time of loss are comforted by the knowledge that his legacy has a permanent place on the Duke campus and in the hearts of those who value the arts.”

Nasher’s vision for a new art museum on Duke’s campus began nearly 20 years ago, when he first stood in the meadow at Duke University Road and Anderson Street and declared it the perfect spot. He had expressed his support for the arts at Duke many years earlier—in 1943, his senior year, when he took stock of the cultural offerings and saw room for improvement. “Our university should enfold culture of every nature,” he wrote in “Time to Think,” his column in The Chronicle, Duke’s student newspaper. “Art and music are basic cultural entities which must not be lost in the shuffle of ‘bread and butter’ seekers.”

Nasher went on to become a successful real estate developer and banker in Texas. With his wife, Patsy, he became an avid art collector; together they would amass one of the world’s most significant collections of 20th-century sculpture. He adorned his commercial properties with sculpture, believing that art enhances the experience of every environment.

In 1998, Nasher provided the largest gift, $7.5 million, toward the building of the new Nasher Museum of Art. The Nasher Foundation subsequently donated another $2.5 million in his honor. Nasher and his daughter, Nancy Nasher Haemisegger, a 1979 graduate of Duke Law School, took on the task of building the new museum with love and dedication.

“Ray Nasher was Duke’s cultural hero,” said Mary Duke Biddle Trent Semans, a longtime supporter of the Nasher Museum and great-granddaughter of Washington Duke, for whom Duke University is named. “He was a man of the people, insisting that the museum be placed close to the public highway so that the city of Durham would be involved. Now thanks to Ray, we shall celebrate constantly his extraordinary museum and cultural center at Duke. He has been my cherished friend for 50 years and I shall miss him every day.”

Nasher was born in Brookline, Mass., on Oct. 26, 1921, to Janet and Israel Nasher. He was married to Patsy Rabinowitz Nasher until her death in 1988. In 2003, Nasher opened the Nasher Sculpture Center in Dallas, designed by architect Renzo Piano, which houses pieces from their collection of more than 300 works. The Nasher collection includes seminal works by Auguste Rodin, Pablo Picasso, Henri Matisse, Alberto Giacometti, Jean Dubuffet, Henry Moore, David Smith and Mark di Suvero. Nasher also established a sculpture garden in his name at the Peggy Guggenheim Collection in Venice, which presents a rotating selection of sculptures from the Nasher collection.

Nasher was one of the first real estate developers in the United States to place sculpture and other art in commercial retail complexes. In 1965, when he opened his first retail shopping center in Dallas — NorthPark Center — he and his wife Patsy made a commitment to install art throughout the center.  He designed a structure inside and out that met the needs of retailers and provided space to display large sculptures from their collection by such artists as Jonathan Borofsky, Mark di Suvero, Henry Moore, Beverly Pepper and George Segal.  NorthPark Center and the nearby NorthPark National Bank (now Comerica Bank) — another project of The Nasher Co. — have won architectural and design awards and become models for other developers around the world. Nasher was chairman of The Nasher Foundation of Dallas and chairman of Comerica Bank-Texas.

He also played a leading role in the development and growth of many of the major arts organizations in Dallas. He founded the Dallas Business Committee for the Arts in 1988 and served as a board member of the Dallas Museum of Art, the Dallas Opera, the Dallas Symphony, the Dallas Theater Center, Ballet Dallas and the Modern Art Museum of Fort Worth. From 1992 to 1995, Nasher served on the Texas Commission on the Arts, and from 1988 to 1992 he was the ambassador of cultural affairs for the City of Dallas.

Nasher was also a member of the National Council of the Fine Arts Museums of San Francisco and the International Council of the Tate Gallery in London, and served on the committees and councils of numerous leading museums, including the Guggenheim Museum in New York and the National Gallery in Washington, D.C. He was the recipient of numerous awards and honors, including: the Linz Award, the Woodrow Wilson Award, the H. Neil Mallon Award of the World Affairs Council of Greater Dallas and the Dallas Business Hall of Fame Award.

Nasher is survived by three daughters and three grandchildren.

This article was originally published in the Nasher Museum’s printed newsletter in May 2007.