Corn is a recurring image in the visual history of America—from its representation in ancient objects to popular and contemporary art. It has always been linked to ethnicity, culture and territorial identity discourses.

This gallery features ceramics, textiles, metalwork and carvings produced by ancient cultures across what is known as present-day Peru. Many on view for the first time, these objects reveal the diverse and sophisticated artmaking techniques through which ancient Peruvians expressed ancestral beliefs and personal and political identities. The wall case provides a comparative view of the ceramic production of several prominent Peruvian civilizations, presented chronologically from left to right. From the colorful painted motifs of the Nasca and sculptural realism of the Moche to the whistling vessels of the Chancay, the ceramics depict realistic and stylized animals, people, deities, food and scenes of warfare, performance, and pleasure.

Numerous objects in this gallery also celebrate the importance of corn, a plant of major significance across Peru. Chicha, a beer made from corn, was consumed at political and ritual events and poured as an offering to ancestors and at sacred sites. It is still widely used domestically and ceremonially across the region today. A two-paneled painting by Renzo Ortega (born in Lima, Peru 1974) depicts corn as a symbol for the native identity of the Americas and the Indigenous knowledge that led to its cultivation.

The Art of the Americas collection is one of the Nasher Museum’s largest holdings. Many of the objects on view came from the collection of Paul and Virginia Clifford, who donated more than 800 works to the former Duke University Museum of Art in 1973. As part of its mission, the Nasher Museum conducts ongoing research on provenance—an object’s history of ownership—and welcomes any information from the public on works in the collection.

This reinstallation is organized by Julia McHugh, the Trent A. Carmichael Curator of Academic Initiatives at the Nasher Museum, with research assistance from Annaliese Hermann J.D.’22, Ally Perez T’20, Diana Sanchez T’22 and Gabrielle Tenedero. This project is supported by Duke Radiology and the Duke Lemur Center.

I used corn for the Mestizaje series because I needed an element that represents the native identity of America, the continent. It is also a recognition of the native agricultural knowledge that developed corn. In my paintings, corn is a symbol that becomes a container that stores information. And that data is our legacy and the foundation of our future.

Renzo Ortega on “Art of Peru” at the Nasher Museum

This interview of artist Renzo Ortega was conducted by Julia McHugh, PhD, Trent A. Carmichael Curator of Academic Initiatives at the Nasher Museum. Corn is a repeated motif throughout your art. Why? Corn is a recu... 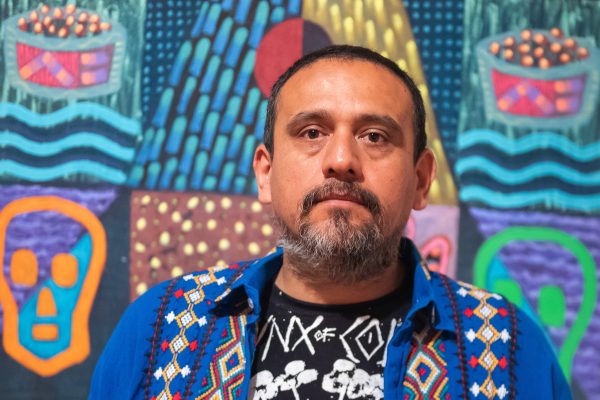