Sonya Clark, standing straight and tall, gently pats a Confederate flag folded across a work table in her Richmond studio. Respectful, thoughtful and serious, she talks about this swath of fabric that symbolizes a difficult piece of American history.

“Racial injustice is something that every American contends with, either consciously or unconsciously, and it’s so deeply embedded in the fabric of our nation,” she says. “The word ‘racism’ is sort of like a trigger word; you know, it can shut people’s ears off, shut people down, bring people’s defense mechanisms up. So I’m less interested in that, and more interested in picking apart and undoing and understanding the fabric of our nation and trying to really understand the roots of racial injustice.”

Clark has worked as a textile and fiber artist for a long time, she says. “Unless you study textiles, you don’t understand that much about them. They are always touching our bodies, they absorb how we smell, they keep us warm, they keep us cool–but most people don’t even know how cloth is made.”

For her work Unraveling, Clark chose a high-quality flag woven from thick, sturdy cotton and stitched together to last. In gallery performances, she invites visitors to work with her side-by-side to unravel the flag, carefully taking it apart thread by thread. Together they dismantle about half an inch in an hour, creating piles of red, white and blue thread. 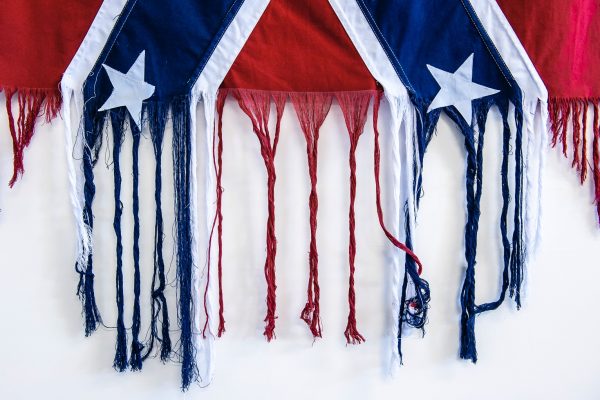 The cloth becomes a metaphor, something very familiar that is investigated and picked apart, she says. “Just slowing down, to think about what has happened here. It took years for us to make the Confederate flag. It’s not going to be an easy thing for us to undo.”

“I think there’s poetry in what we’re trying to do together. So the right word matters – which is not to rip, but to unravel,” Clark says. “There’s a little bit of …well, we’re picking cotton together.”

In this country, European Americans experience grief, too, Clark says. “There’s the burden of prejudice and legacy of racial injustice, but there’s also the burden of guilt. There’s a lot of space between those two things, but they are both burdens. If you didn’t have hope in this nation, it would be a pretty awful place to live as a person of African descent. There’s got to be hope that we will do better. We do better, but simultaneously, we sometimes do worse.”

Clark was born in Washington, D.C., to a psychiatrist from Trinidad and a nurse from Jamaica. She is known for her work as a textile artist and has received numerous awards, among them a United States Artist Fellowship.  Her work has been presented in more than 300 museums and galleries around the world. Recently she was awarded an Art Prize Grand Jurors co-prize for her project with 12 hairdressers who helped her demonstrate the links between hairstyles and textile arts. She earned a bachelor’s degree in fine art from the School of the Art Institute of Chicago and a master’s degree in fine art from the Cranbrook Academy of Art in Michigan. Since 2006, Clark has chaired the Department of Craft/Material Studies at Virginia Commonwealth University in Richmond.

“You know,” Clark says, “the beautiful thing about human beings is that we do have this ability to find ourselves in one another, if we are willing to do the work.” 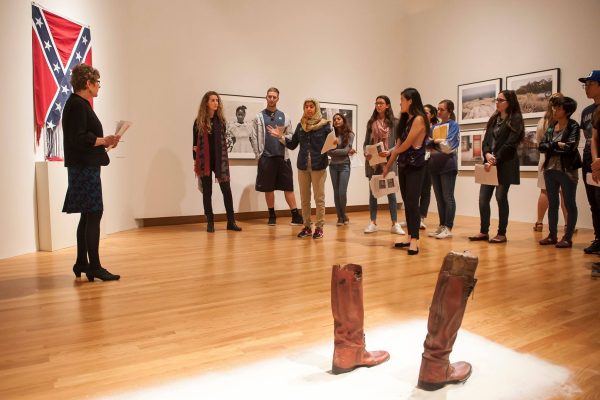