The Nasher Museum is collaborating with Duke Arts and Duke Health to present an unprecedented outdoor exhibition and public awareness campaign by nationally renowned artist Carrie Mae Weems. The project, called RESIST COVID / TAKE 6!, emphasizes the disproportionate impact of the deadly virus on the lives of communities of color, through large-scale banners and window clings, posters, street signs and more. 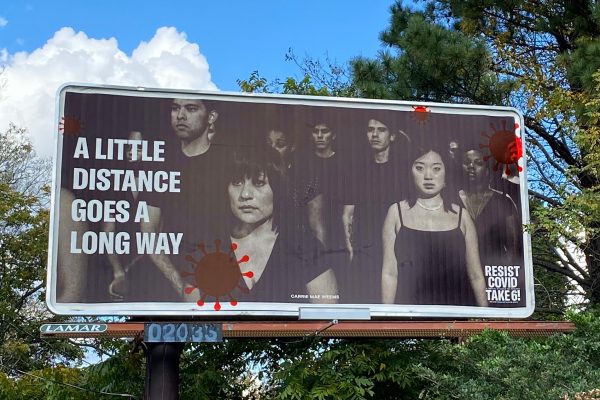 RESIST COVID / TAKE 6! will be a catalyst for discussions within and beyond the Duke community. The project helps to combat misperceptions about the COVID-19 virus, celebrates front line workers, raises issues of public health and racial inequities, and underscores how art can function as a public awareness campaign. 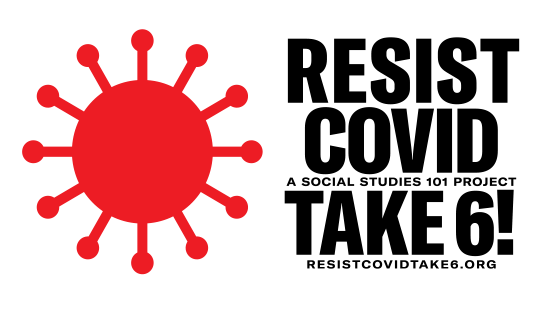 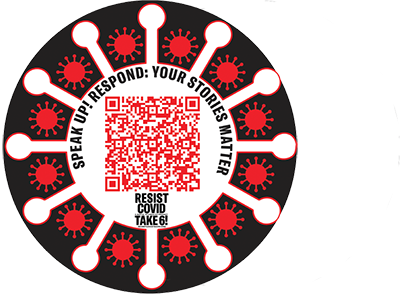 We invite you to speak your own truth. How have your life, your family, your hopes and fears transformed since the start of this global pandemic? 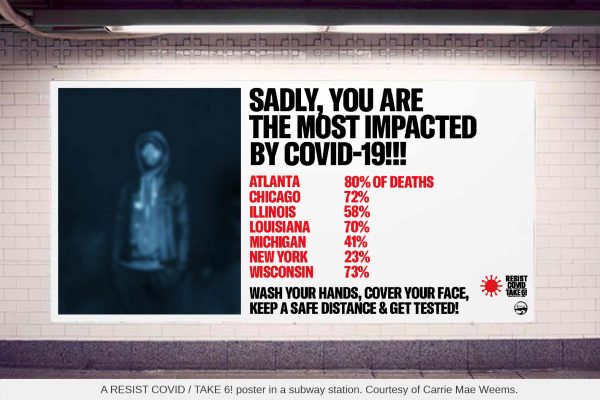 In the guise of a marketing campaign, this artwork fights two viruses, COVID-19 and systemic racism.

John Brown, Vice Provost for the Arts at Duke

At Duke Health, we’ve been privileged to care for our community through unprecedented times, and we have seen firsthand the disproportionate effect that COVID-19 has had on frontline workers throughout our state. We are proud to partner with the Nasher and Duke Arts to present this powerful work by Carrie Mae Weems, which shines a light on these essential and valued members of our community.

The Nasher Museum has a long history and strong relationship with artist Carrie Mae Weems, whose work is part of the museum’s collection.

Widely renowned as one of the most influential living American artists, Weems examines how our society structures power through deeply embedded stories, images and ideas. A gifted storyteller who works porously between text and image, Weems has developed a revolutionary approach to the expression of narratives about women, people of color and working-class communities, “conjuring lush art from the arid polemics of identity” (The New York Times). With a complex body of work encompassing photography, text, fabric, audio, digital image, installation, performance, and video, Weems’s work asks us to look deeply at the two-dimensional image, to explore complex realities and revisit unexamined perspectives.

In the News: Harper's Bazaar

Her RESIST COVID / TAKE 6! public awareness campaign aims to get information into the hands of those most impacted.

Make the Most of Your Outdoor Visit

Visitors are welcome to view RESIST COVID / TAKE 6! in person from the safety of public sidewalks and pathways around the outside of the Nasher Museum and Rubenstein Arts Center, located at Campus Drive and Anderson Street. The project can also be viewed safely by car on Anderson Street, a public city street.

The Nasher Museum, in keeping with Duke University’s campus-wide health and safety measures to curb the spread of the COVID-19 virus, will remain closed through the summer. All public in-person events and tours have been cancelled.

At Duke, RESIST COVID / TAKE 6! is co-presented by the Nasher Museum, Duke Arts and Duke Health.

At the Nasher Museum, the exhibition is made possible by The Mary Duke Biddle Foundation; Thomas S. Kenan, III; Center for Truth, Racial Healing & Transformation; the Lyna J. Rogers Fund; and Ann and Rhodes Craver. 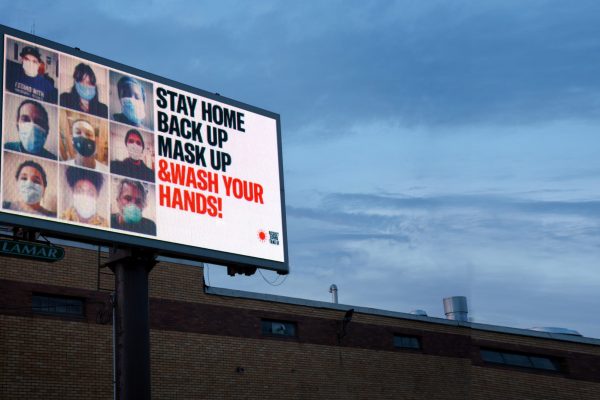 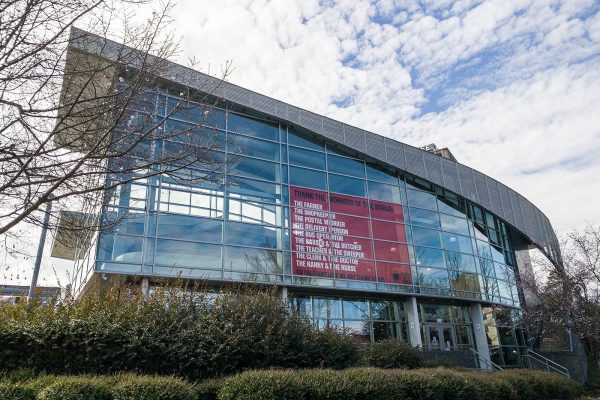 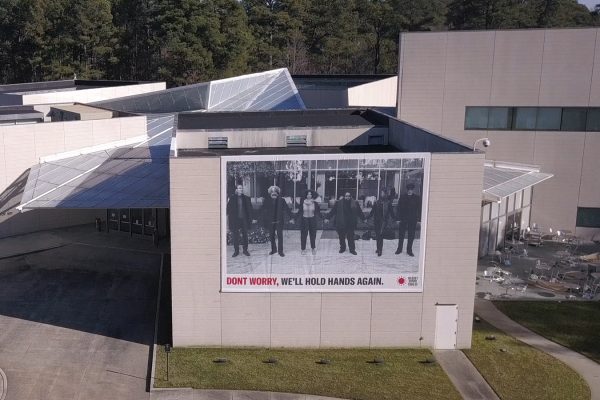 Tales from Campus: Radical Collaboration at the Nasher Museum 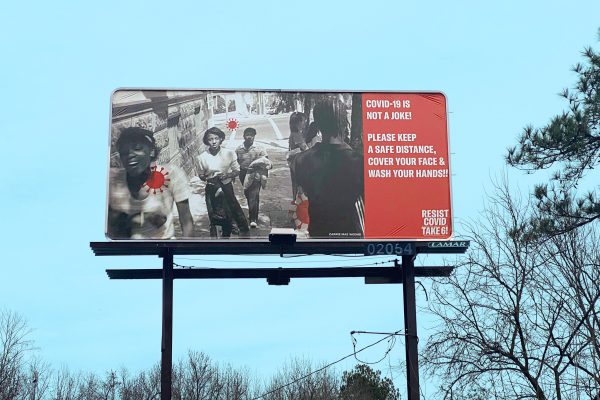 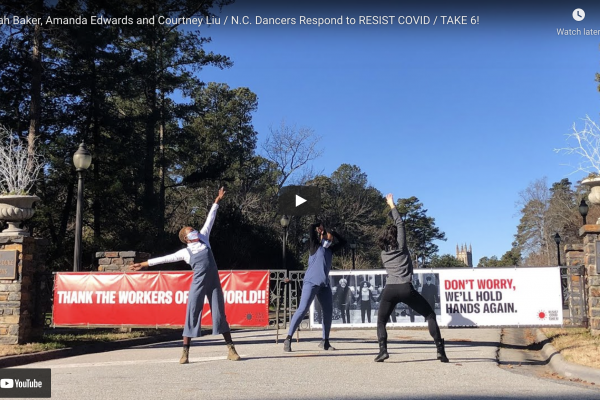 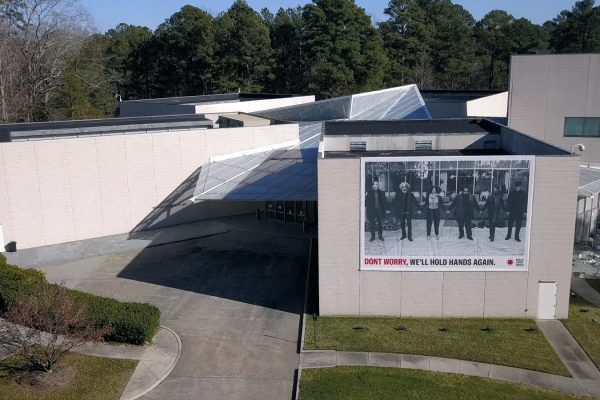 Art in the time of COVID 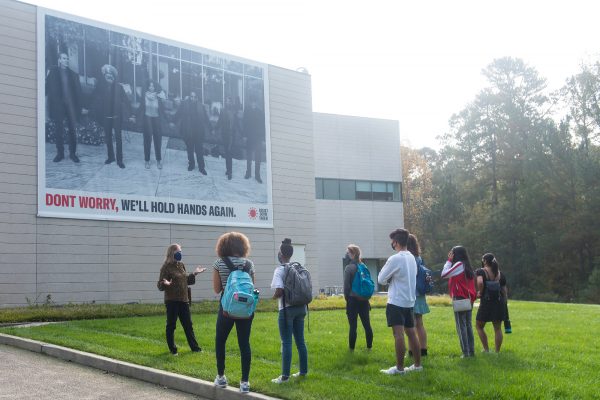 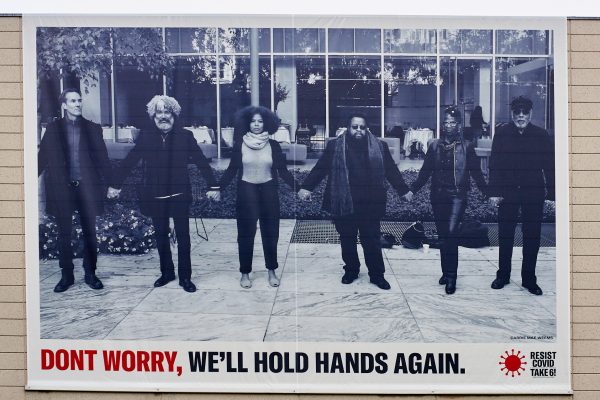 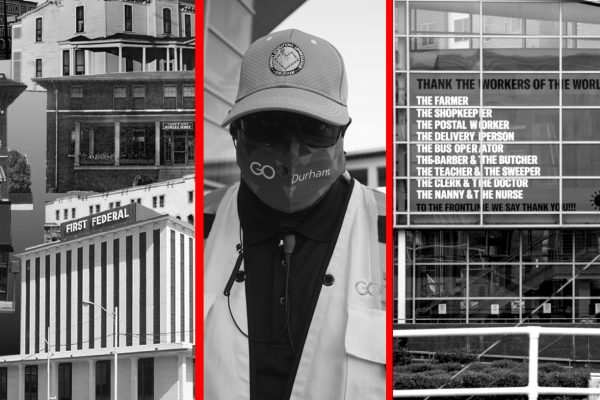 On 6 Feet / A Message of Hope / Thank the Workers 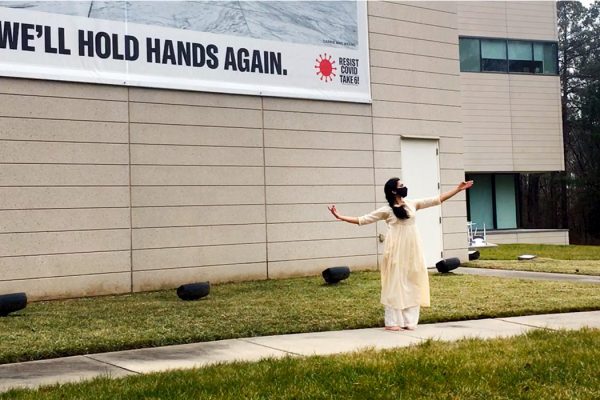 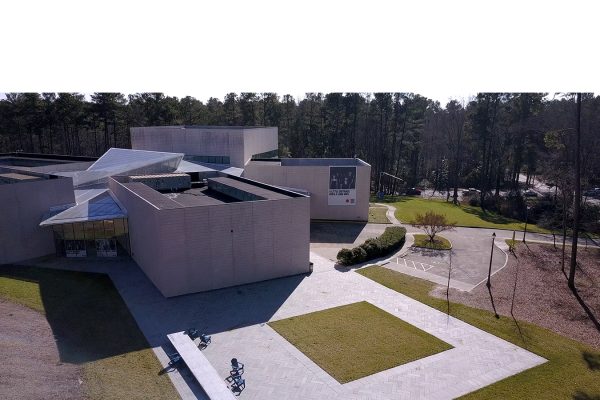 RESIST COVID / TAKE 6! Seen from Above 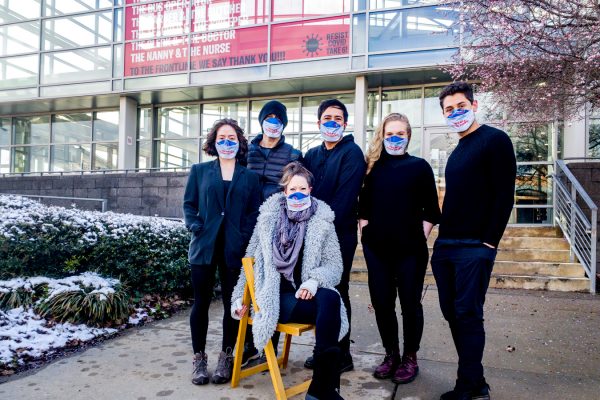 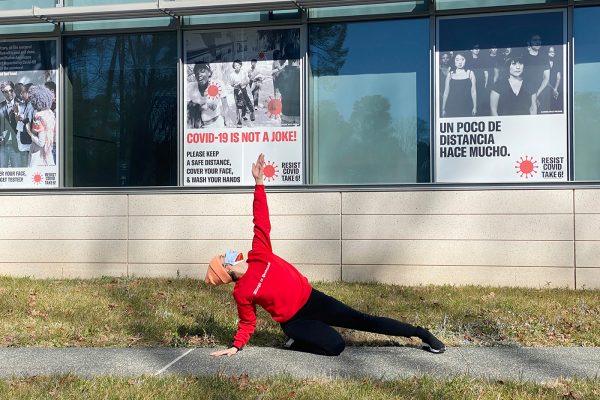 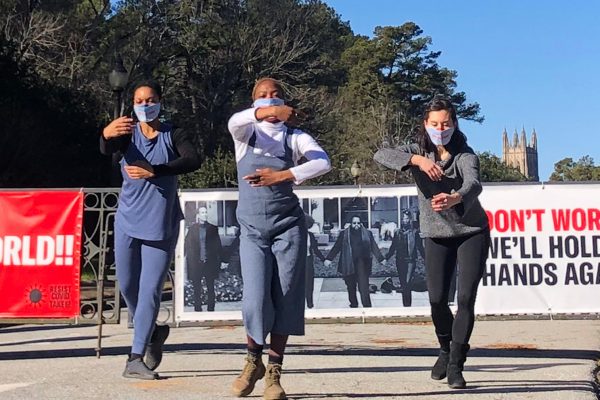 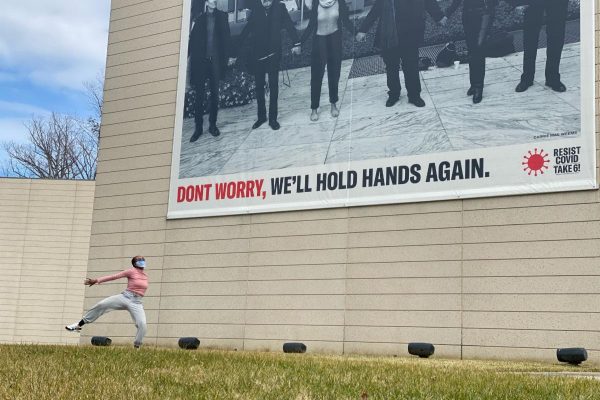 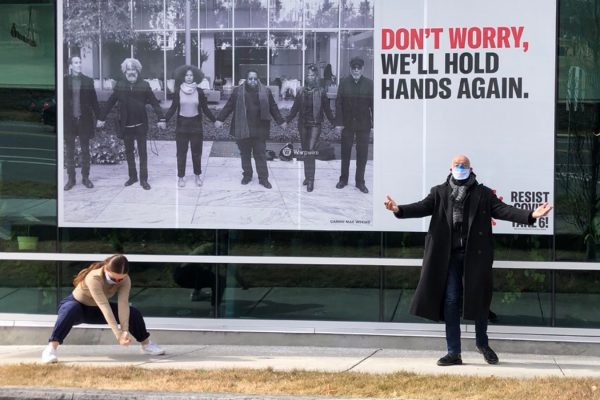 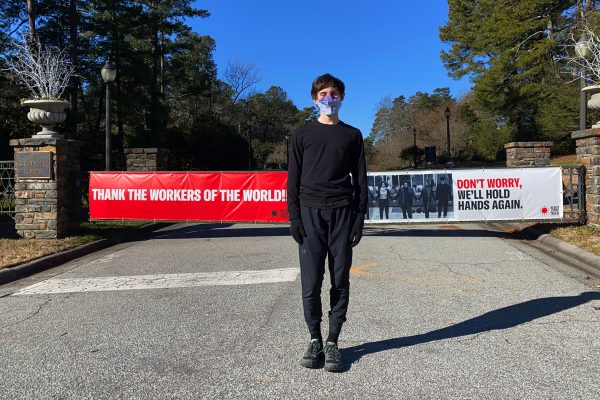 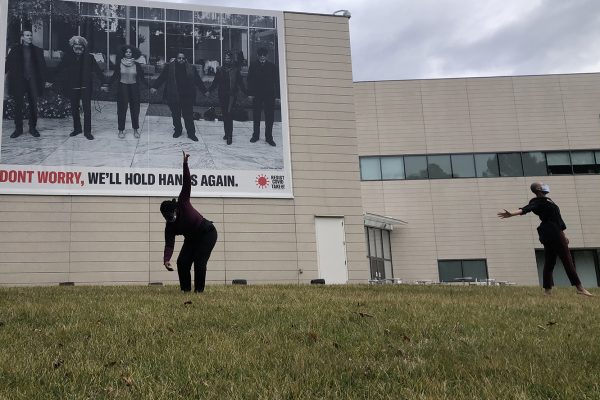 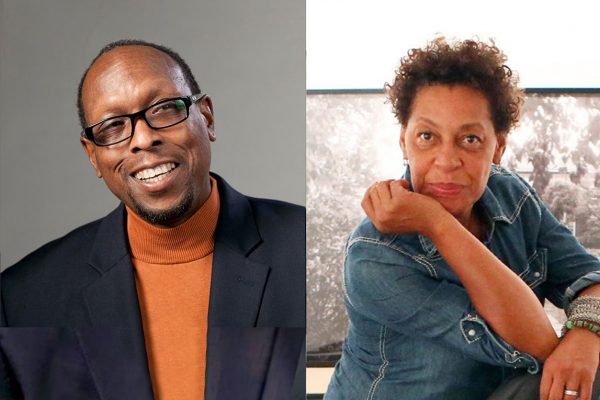